After being honored the previous night during the Excellence in Club Management (ECM) Awards Presentation and Dinner, the four recipients of the 2022 ECM Awards participated in a panel discussion, moderated by Frank Vain, President of McMahon Group, as part of the educational agenda for the National Club Conference held in Charleston, South Carolina from May 15-17.

The wide-ranging discussion included the ECM winners’ comments and thoughts on a variety of subject areas brought up by Frank Vain—everything from lessons learned from their own personal mentors during their lives and careers, to the importance of building and sustaining workplace cultures that lead to attraction and retention of staff, to keys for effective governance and successful relationships with club Presidents, Boards and Committees.

The panel discussion can be viewed in its entirety at Here.  Here are selected highlights of the panelists’ responses to questions posed by Frank Vain:

Question:  Who were some of your own personal mentors, and what were some of the valuable lessons you learned from them?

Steven Cummings, Harvard Club of Boston: Some things that some of my past Presidents told me come to mind. At Brae Burn Country Club, where I was General Manager of a big club at 28 years old, one President told me, “Don’t let it go to your head—and do the right thing.” Another told me two really important things: “Luxury, once tasted, becomes a necessity,” and “The farther up the pole you go, the more your rear end is showing.”

M. Kent Johnson, Baltimore Country Club: I grew up in a small town where my father ran a construction company. When I was eight years old, someone blew up their house when they hit a gas line while digging in their yard. My father woke me up and took me with him as his company started to rebuild the man’s house. It was my earliest lesson in hospitality that I wouldn’t recognize until years later, but it’s truly been one of my more impactful memories, and the brand of hospitality that we strive to employ is deeply rooted in those types of connections.

Question:  What are the keys to stability in a career as a club manager?

Michael Stacks, Indian Hills Country Club (the Club’s GM since 2002): Find a place that fits you and your management style. And it’s how you feel and the energy you project when you walk in that door every day. You have to come in with a great attitude; whatever attitude you might be feeling inside, you don’t let it be seen—you let everyone see what you expect them to be. If they buy in to your philosophy, as a leader and as a culture, the ‘first day’ is every day. 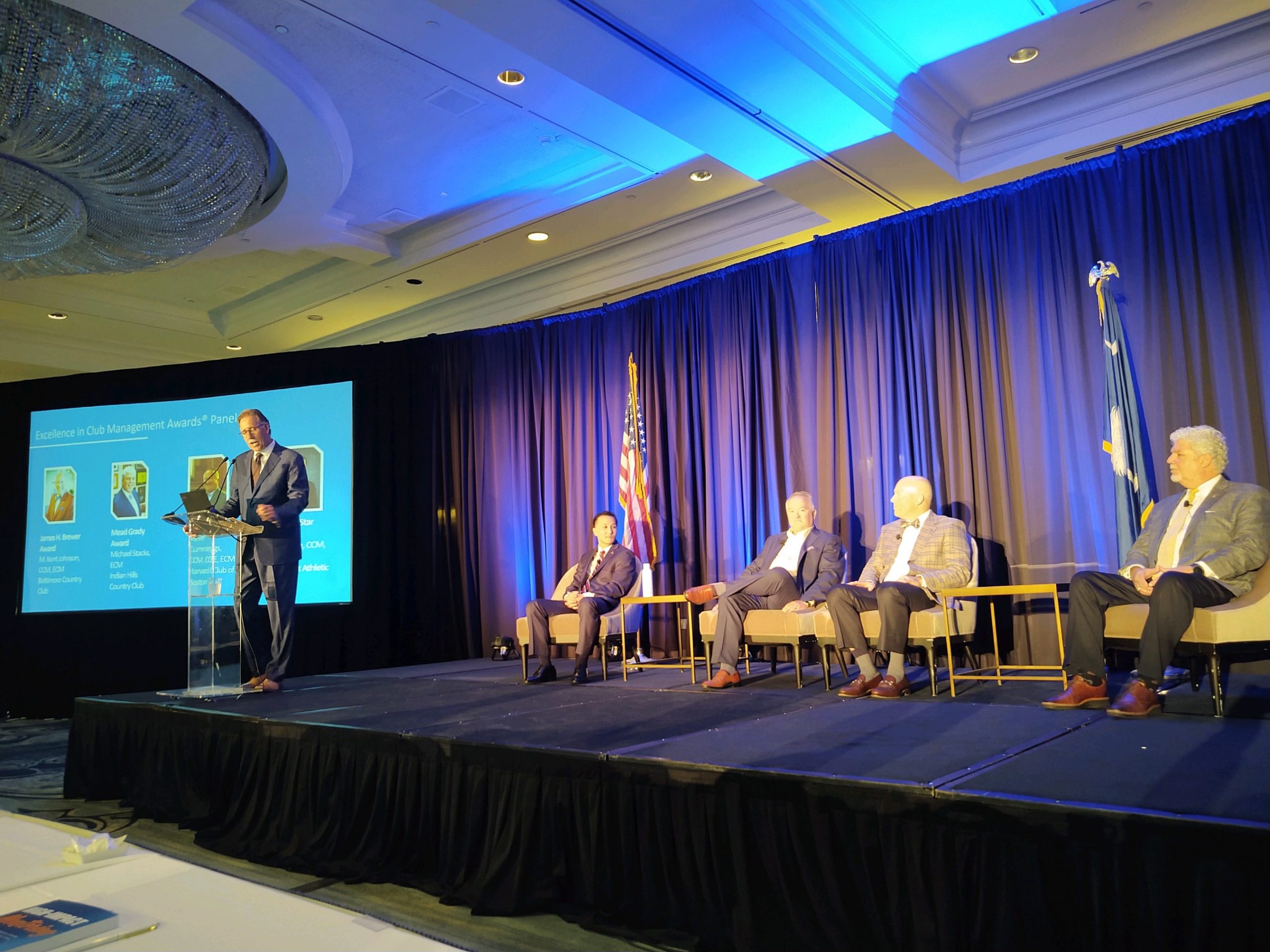 What are proving to be the biggest challenges that have come out of the pandemic?

Tai Tran, Detroit Athletic Club: The hardest hit for us has been on the banquet/events side. We normally do about $8 million a year in banquets and events, and are trying to get back to that level, but are only about halfway there. The a la carte side is doing very well, exceeding 2018-19 numbers. But big parties aren’t happening anymore, so we’re doing smaller events, and that takes some toll on our banquet staff and we’re focusing on rebuilding our banquet team.

We’re getting pretty creative in how we recruit, offering new-hire retention bonuses and getting referrals through employees who are trying to recruit through the churches they go to. Once we get them in the door, our orientation process is pretty comprehensive—they go through our Culture Workbook so they can get on board early and we make sure they understand the DAC culture and membership. But because we’re a year-round club, recruiting at colleges is tough, because we don’t have summer or winter seasons. Our chef has been a professor at a culinary college, so that’s helped with kitchen staff. But in the front of house, we’re still struggling.

Question:  What lessons have been learned, especially through challenges posed by the pandemic, about effective governance and Board/committee structure and management?

M. Kent Johnson: We’ve really tried to be focused on building our committees back the right way, with no single-issue or single-minded folks on any committee, a vetting process for what it takes to even get on a committee now, and making sure we have the right mix of men and women and ages represented and that they’re all focused on the same goal.

Michael Stacks: You want the people who really love their club to be part of what’s driving all of the policies and programs. We send out an interest form to all of our members, to see who wants to be on a committee and what they’re interested in. We get 30 to 40 responses from that each year and that’s who we go to. It’s no longer ‘I want all my fraternity brothers on the committee’; now we have structure and it really works, especially in this climate.

Question:  What’s ahead for the future at your clubs?

Tai Tran: We see a lot of demand from our membership now for programming that’s outside the four walls of the DAC. As an example, I took about 220 members last year to The Breakers in Florida, and this year we’ll go back with maybe 250. We’re hoping to build on that to add more member experiences and value to their membership. We have an eight-story building, but are busting at the seams sometimes and have overcapacity inside the building, so it’s nice to be able to do things with members that are not only “outside the box” but “outside the building,” and we’re looking to do more of that.

Steven Cummings: We have a project that is in the permitting stage with the city of Boston. The annex to our main clubhouse, which includes squash courts and locker rooms on multiple levels, is not handicapped accessible, and the cost to make it accessible is extraordinary. So we started looking at development opportunities and formed a partnership with a developer to plan about a $135 million project that would raze the existing building and put up a new 11-story building.

We’d have 20,000 sq. ft. to ourselves, for space that would include a new locker room, squash complex and fitness facility. There would be about 100 luxury apartments above that, and also a rooftop amenity that we would own and operate. We also have the last surface parking lot on our street and there’s a plan to build an underground/aboveground garage with another 30 apartments.

We’d do it through a 75-year ground-lease, after which the Club will take back all the assets. So for our share, we’re getting about $30 million in new facilities and also getting some cash payments from the ground-lease. It’s going to be about an 18-month to 2-year project and there’s a lot of work to do, to find temporary squash facilities and solve parking issues—the plan is to be open completely during the renovation. But it’s pretty exciting.